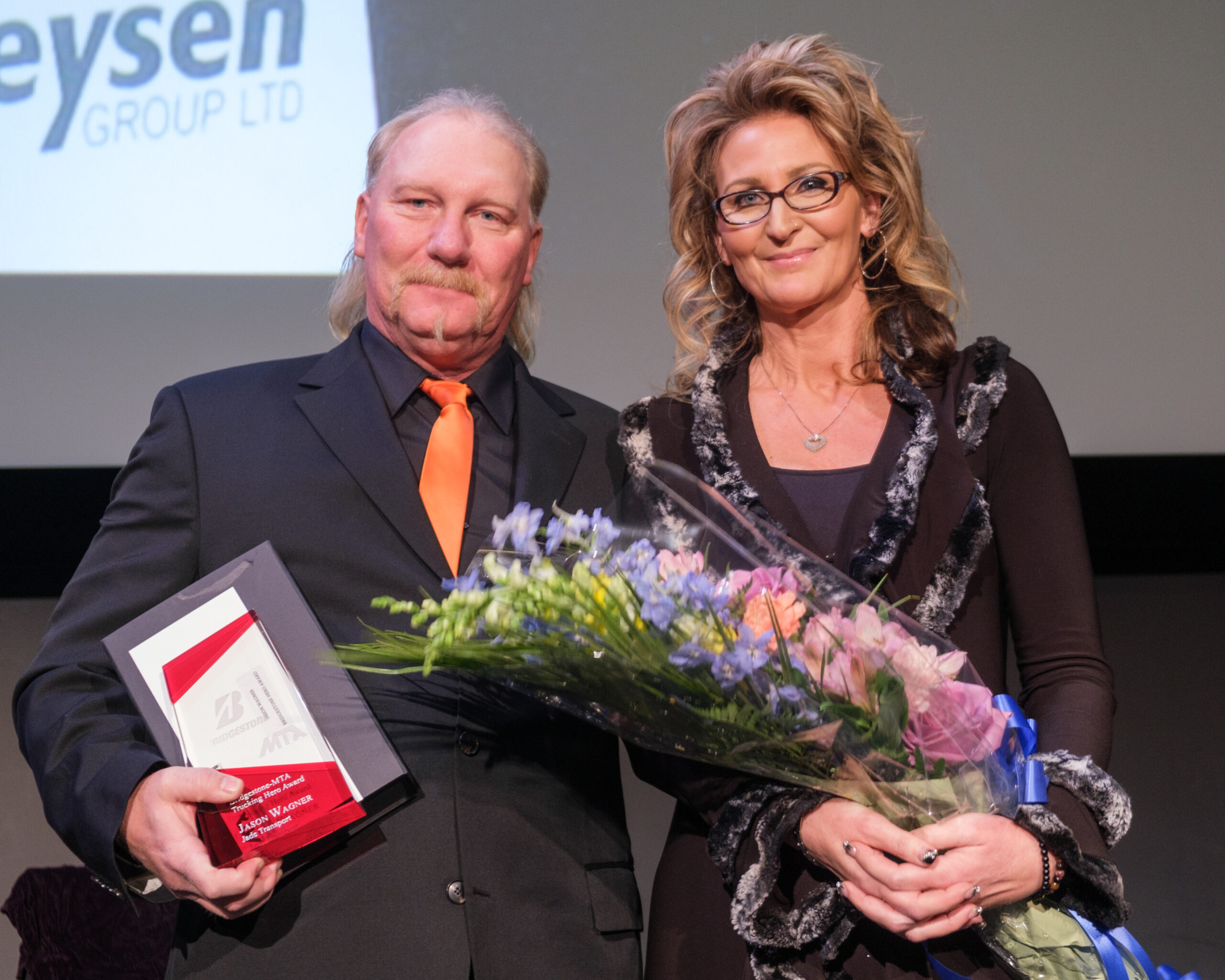 Members of Manitoba’s trucking community gathered on November 18 to celebrate the industry and recognize those who made significant achievements to trucking in Manitoba.

Also announced at the gala was the winner of the new MTA-Associated Trades Division Social Responsibility Award. This award was created to recognize those MTA members making a difference in the communities where we work and live. The inaugural award recipient was HyLife. Nominated in the categories of community service, innovation, and philanthropy, HyLife’s goal is to live their mission: take care of their 4,500-plus employees, take care of their customers, and take care of their communities. Some of the initiatives undertaken at HyLife include one and two million safe miles clubs, volunteer of the year, National Trucking Week efforts to support the entire industry, the Local Heroes campaign, and HyLife Fun Days, which has resulted in more than $1,000,000 raised for local charities. HyLife is also a proud participant in the Agricultural Clean Technology Program.

Eight new members were inducted into the Pioneer’s Club, a group of leaders who have been continually employed in Manitoba’s trucking industry for at least twenty-five years and have made positive contributions to industry during that time. The 2022 MTA-Ocean Trailer Pioneer Award inductees include:

The evening opened with greetings from The Honourable Doyle Piwniuk, Minister of Transportation and Infrastructure and MTA President Jason Dubois (Len Dubois Trucking). In his speech, Dubois noted the importance of addressing the industry labour shortage, road safety initiatives, investment in infrastructure, and environmental concerns. He also emphasised the important contributions and dedication to the industry of those in the room, thanking them for their contributions and fresh perspectives.

The MTA would like to congratulate all of the evening’s award winners and thank sponsors and attendees for their continued support of the Manitoba Trucking Association.

About the Award Recipients
MTA-Omnitracs Distinguished Member: TransX Group of Companies
TransX Group of Companies has a long history in Manitoba’s trucking industry and has been a supportive member of the Manitoba Trucking Association for decades. In 1956, a young fellow by the name of Louie Tolaini made the move from Tuscany to Canada, and by 1963, Louie was the general freight provider for the Virden area under the name Virden Freightways. By the early 1970s, the company was hauling freight as far east as Toronto and south to Minneapolis. This was also when the name changed from Virden Freightways to the name we know today: TransX.

Since 1963, when TransX was first formed, they have been members of the Manitoba Trucking Association. TransX has been represented on the MTA’s Board of Directors and Vehicle Maintenance Council.  They have supported the MTA’s careers committee, trucking driving championship committee, and various other committees and councils. Staff have answered the MTA’s call for input on a variety of topics and TransX has long supported the MTA’s events through attendance and sponsorship.

MTA-Red Coleman Service to Industry Award: Bernie Driedger, Portage Transport
Past MTA President, Bernie Driedger of Portage Transport bought his first truck in 1988. In 1998, Bernie had an opportunity to buy a local cartage company with five small trucks and the journey began. Bernie very quickly realized his passion was in long haul trucking and started transitioning in that direction by adding a long-haul reefer division in 2002. He has held every position except CFO and payroll administrator, which his wife, Liz did from day one; and in Bernie’s words “That is the main reason we are on solid footing today.”  The company currently has a fleet of over 100 trucks and 150 trailers and boasts a complete network of transport support services. They operate with a full team of dispatchers, administration, truck and trailer technicians, wash bay, and warehouse personnel.

Bernie joined the MTA’s Board of Directors in 2012 and became President of the MTA’s Board of Directors at the 2020 Annual General Meeting. His time as MTA President was marked by a global pandemic, constant regulatory shifts, climate change-related issues that seriously affected infrastructure across the nation, massive protests, and a major evolution in the workplace. Through it all, Bernie’s calm demeanour and focus on key issues helped ensure the MTA weathered the storm. While Bernie would insist it was a team effort, we all know the importance of strong leadership during difficult times.

MTA-Volvo Trucks Canada Manitoba Driver of the Year: Jason Larocque, Kleysen Group Ltd
The 2022 MTA-Volvo Trucks Canada Manitoba Driver of the Year is Jason Larocque of Kleysen Group Ltd. Jason is a cross border, long haul truck driver who has very specialized training and extensive experience. He’s been with his current employer for many years and has over 2,000,000 safe miles under his belt. Known for a positive attitude, he is always willing to help in any way he can. Jason is well liked and respected by his colleagues and has grown into the “go to guy” anytime a situation arises. He communicates well in all areas of the industry: office, shop and yard. He is the type of person who comes with a solution, not just a problem. As an instructor he has the knowledge and expertise to train the next generation of drivers on safely operating almost any configuration of equipment, professionalism and community awareness. Never shy to share ideas, he is actively engaged with Kleysen’s accident review committee, driver advisory board and the health and safety committee. He has been a participant in the truck driving championship and truck convoy for special Olympics.

MTA-Payne Transportation Ltd Associate of the Year: Kevin Teixeira, Fort Garry Industries
The recipient of the 2022 MTA-Payne Transportation Ltd Associate of the Year award is Kevin Teixeira of Fort Garry Industries. As someone who has sold trucks, trailers, parts and service, Kevin knows all aspects on the sales side of the trucking industry. As a member of the MTA’s Associated Trades Division (ATD), Kevin is always willing to bring his subject matter expertise to discussions around the ATD table. He understands the value of investing in the next generation of Manitoba’s trucking industry participants, and is a strong supporter of the MTA’s scholarship program, lending a hand to golf tournament sub-committees to help ensure the event success. He also volunteers at various MTA events throughout the year. Most recently he sat on a committee to develop and implement the new MTA ATD Social Responsibility Award. He is an industry expert the MTA can call upon as needed.

MTA-Bridgestone Trucking Hero Award: Jason Wagner, Jade Transport
As anyone working in the trucking industry knows, there are acts of heroism taking place each and every day in our industry. On May 9, 2022, while driving from Yorkton to Esterhazy, Jason Wagner of Jade Transport witnessed a Ford Explorer suddenly swerve off of the highway into a drainage canal adjacent to the roadway. The Explorer plunged into approximately four feet of water and the cab began filling with cold water.

Having witnessed the vehicle leave the road, Jason pulled over to offer assistance. He quickly learned that the driver was having a seizure. Jason prioritized the two children in the back of the vehicle, removing them from the Explorer and handing them off to another driver who had also stopped to help. Jason also directed the other driver to call emergency services, and to wrap the children in blankets from Jason’s own truck.  Jason then set to work removing the passenger from the vehicle. By this time, the driver of the vehicle had stopped her seizure; however, she was exhausted from the seizure and Jason carried her to dry ground.

By this time, EMS and family members had arrived, called by the other driver who had stopped to help. Jason was told he was free to go, and he carried on with his day, barely even late for his delivery appointment! 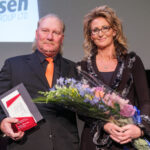 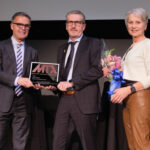 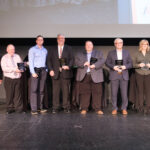 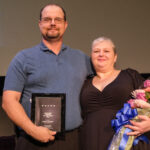 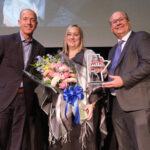 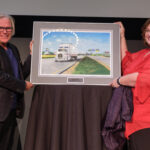 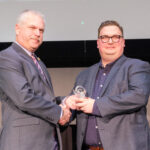